Here are the words Rafael Treite, running coach and moderator, uses to describes his current stay at the Run2gether Camp in Kiambogo:.

Kenya – what a wonderful country. I’ve been at this glorious spot for two weeks now, and every day I’ve experienced so many small, yet remarkable things.

On Sunday, Ronaldo invited me to go with him to church in the village he was born in. I was expecting a short Sunday outing with a brief mass – but it ended up being an event that lasted the entire day. After a brisk walk, motorcycle ride, and trip in a matatu, we got to church after an hour. Mass was already in full swing. 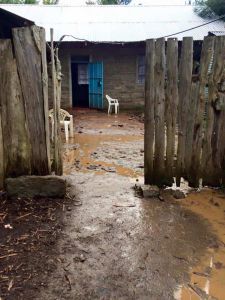 The entrance to the church. From the outside you wouldn’t notice a thing.

As soon as I entered the church, all the texts were immediately translated especially for me into English, which I later found out was the custom when there were guests. In Germany, mass lasts an hour; here, I was expecting somewhere between one and two hours on account of all the stories being told. Yet it ended up lasting three! Three hours of mass! And yet none of the children started getting antsy or loud – and believe me, there were a lot of children there. That had a lot to do with the singing – though it was more like „get-up-and-move breaks“ with background vocals because what began as songs slowly gained in momentum until they ended up as almost ecstatic shouting and dancing. I’d never experienced anything like that before. A song could last up to ten minutes. Afterwards, half of the congregation got out their handkerchiefs to wipe their brows, and then the next sermon began.

At the end of mass I was asked to say something to the congregation. It wasn’t easy for me to come up with something meaningful with all the expectant faces looking at me. So I thanked them for their hospitality and for their wonderful country. I told them about my family. And since, on account of my being there, Germany and prosperity had been mentioned in one of the sermons, I also made a point to mention that happiness really had nothing to do with material items. It was really all about family and togetherness – something I’d been experiencing more in Kenya than I ever did back home.

Afterwards, several people came up to me and thanked me for coming and my kind words, something which I found very moving. 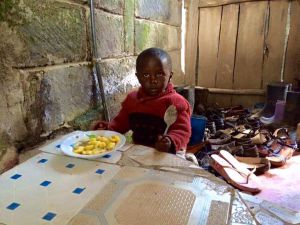 After church, the priest invited us to lunch. In fact, the entire congregation shared in the meal all around the church. 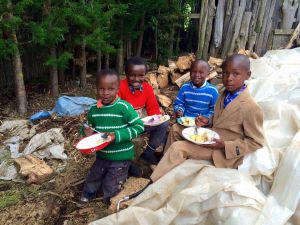 Lunch as a guest of the pastor’s Family 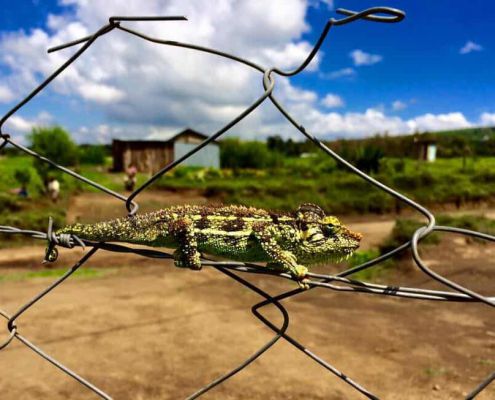 On our way back in the matatu, we had a talkative driver, who mentioned the poverty in the Kenya, as opposed to life in Europe.

But then he also said: „God must really love Kenya and all of Africa because of all the places in the world, he sent the most beautiful animals of the world to us. You won’t find that in any of the rich countries. Everyone wants to come and see them here. God must really love us.“ I thought that was a wonderful way of looking at the world. 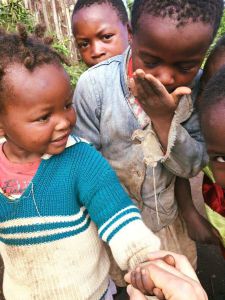 When children meet you, you’re a â€˜mzungu‘, a white person. They always want to touch your hand – and will alway smell their hand afterwards. It seems like I’ve slapped hands with 1,000 children by now.

If you’re willing to meet the people here, you’ll experience so many wonderful things!