One of the worst-kept secrets for the success of Kenyan runners is what we consider to be their hard childhoods. At the moment here in Kenya, children are on vacation. The new school year begins in January. When we go on our runs between the fields, children are always out working alongside their parents. 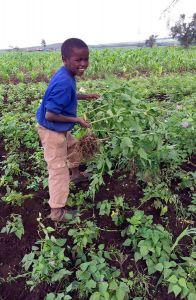 Children working in the fields

I asked the Kenyan athletes about their childhoods, and they all said that they worked with their parents at home while they were schoolchildren.

In addition to these chores, many of them also had a 10K walk to school. Plus, there were few distractions such as a TV or a computer. Playing outside was all there was. To me it’s totally clear why the Kenyans have been dominating the running world since the 1960s.
This mix of resilience, lack of amenities, and desire to win – along with the sheer number of kilometers run barefoot (kilometers that aren’t even considered training) – is the foundation that a young person growing up in Europe can hardly hope to match. 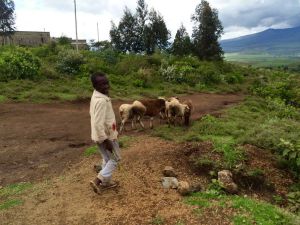 You come across many laughing children

In Europe you hardly find this desire to win. Through training, we try to instill it in our young talent, but the fire really has to burn from within, something that you don’t find very often, especially in endurance sports. There are only a few exceptions in Germany and Austria. That’s why only very few Europeans can keep up with runners from Africa.

One of these children, namely my young friend Joseph Kamau, accompanied me on an 11.3K cross-country run with an elevation gain of 170 meters. He had to stop every now and then with stomach stitches, but always managed to catch up to me. Meanwhile I took a major spill in a huge puddle. We were running a 4:37/K pace. The kid was tough! 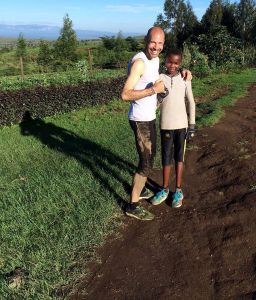 And by the way, the children here don’t seem unhappy or overburdened. That’s just how their life is. I’ve seen a lot more laughing children here along these dirt roads than back home…